First of all, let me start by saying how much I have enjoyed using Di DeCaire's Four Beasts in One in my patterned daylily hybridizing program.  It has been an outstanding parent and thank you Di for sharing your great daylily with me. After making my initial crosses with Four Beasts in One, there were so many seedlings I had to devote a large portion of my garden to the area where I lined them out. There were two seedlings that were stand outs, this one and another 2020 intro, Border Skirmish, which you will see below. In the past, the problems with patterned daylilies were how consistently they showed their pattern.  The first blooms of other patterned daylilies would show patterns and then subsequently fade, but not Xenomorph. Xenomorph showed it's pattern consistently every day and it extends it pattern on to the sepals. I gave Xenomorph a good testing period and was very pleased with it's performance.  Xenomorph is a peach colored daylily with a chevron patterned violet colored eye zone that blends into a yellow green throat.  Easily fertile both ways setting a pod on almost every bloom crossed on. The name, Xenomorph comes from the Alien's movies, which I am very fond of.  Due to early interest I am sorry, but it is already sold out. I made sure to send some of Xenomorph to some re sellers down in Florida and it should become available in a couple of years.  Watch The Lily auction for those re sellers and there are always seed sellers that will be selling crosses of Xenomorph this winter and next Fall.

Another lovely Four Beasts in One seedling.  This intro has a larger bloom when established and a real pleasure to hybridize with as well. You can't miss this flower when walking down a row of daylilies. Lovely cream colored bloom with a violet patterned eye zone, complemented by concentric circles blending into a yellow green throat. It has a corresponding precise thin violet edge around the outside of the petals.  The pattern will extend onto the sepals. Easily fertile both ways and another daylily that is so easy to use. I have bloomed a couple seedlings and it does pass on it's pattern rather easily. This is another daylily that garnered early interest, so I apologize, but it is sold out as well.  Watch for this on The Lily auction in the years to come.

From a row of seedlings I had planted along the driveway, one stood out from the rest. Perhaps it was the 38 to 40 inch scape?  Or maybe the 4 way branching?  Broken has some of the best plant habit of any patterned daylily in the garden.  Most of the patterned daylilies I have grown in the past are down in the foliage or bean pole scapes.....not Broken though! You don't have to break your back bending over to cross on this daylily.  Lovely lavender blooms complemented by a darker purple patterned eye zone, blending into a yellow green throat. Easily fertile both ways.  The pattern varies from bloom to bloom. Some bloom's patterns are stronger than others depending on the day and the conditions. I've been breeding heavily with Broken, hoping that it passes on that excellent plant habit to it's offspring. Broken is anything but broken.  I liked the name because we all occasionally feel broken every now and then. Sorry Sold Out. Should be available on the Lily auction from re sellers in the future.

In the first couple of years this seedling bloomed it garnered some attention from hybridizers visiting my garden. There are other toothies similar to it, but the plant habit on this daylily is the reason I decided to introduce it.  It has held up well during it's testing period, even being moved once and never skipping a beat. Lovely purple blooms with a darker purple eye zone, complemented by a double edge of dark purple and white teeth around the outer edge. Fertile both ways.  Sorry, this intro is sold out and being held back for increase.

Lots of great Moldovan genetics in this intro.  Back in the summer of 2013/2014, Roy Woodhall shared some pollen with me from Moldovan seedling S414, which you can see in the parentage above. It was a very lovely flower with a very unique patterned eye zone.  I brought the pollen home and tried to mate it with the closest bloom I could match it with, which was a seedling I had saved, also because of it's unique eye zone.  The best seedling from this cross is my introduction, The Shawshank Redemption. A very tall scape at 34 inches.  Sadly it is a bit top branched, but the flower and it's height  made me decide to introduce it.  The last two years I have been crossing heavily on it.  Sets pods with ease. The Shawshank Redemption is a purple bicolor with lighter purple sepals, and a slate blue patterned eye zone, blending into a large yellow green throat. A very lovely flower and I'm hoping this will be a jumping off point for seedlings with the same color, and large green throats. Easily fertile both ways.  Named for one of my top 5 favorite movies that was filmed here in Ohio. Sorry this is sold out.

I started my landscaping business in 1987.  That year I had contracts with 5 customers. Of those 5 customers one stayed with me for a total of 31 years. That customer was Victor Tamulis. Victor and I became good friends over the years. I found out that Victor came to the United States from Lithuania in the early 1960's.  He was a war veteran and served in the Korean war. After that he moved into his parent's home here in South Euclid, Ohio and worked in the local General Motors Plant until retirement.  Victor was a good man and I am grateful to have gotten to know him. Victor passed away last December and was 89 years old.  I cut the grass at his property this year, but it sure was different without Victor coming out to say hello every week. He loved his rose garden and especially red roses, so I thought naming a red daylily would be a fitting tribute. Victor Tamulis, the daylily is a cardinal red daylily with a lighter, faint watermark blending into a yellow green throat.  Easily fertile both ways.  Due to early interest this daylily is sold out. It should appear on The Lily auction in the years to come from various re sellers.

I have been lucky and blessed to have come into contact with so many nice people in the 32 years I have been landscaping.  My friend, Barbara Malchow is another lovely person.  I think I started cutting Barbara's grass about 10 years ago and have enjoyed seeing her every chance I get to talk to her. Barbara has worked many years for the Swagelok company and has a son who lives in Arizona.  She has always been very kind to me, so I thought that this daylily would be a fitting tribute.  Barbara Malchow the daylily is a lovely cream colored bloom with a red colored eye and corresponding thin red edge around the outside of the petals. It blends in nicely to a yellow green throat. This is a daylily that you can see from across the garden.  Fertile both ways.  Sorry this is sold out.


Thank you for looking at my intros.  If you need any additional information please contact me at PLar4747@aol.com 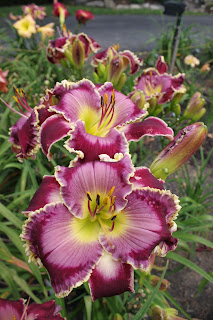 Sometimes in life we need a little extra help to help us navigate through rough waters.  I had to see a psychiatrist to get some extra help with some problems, and will always be grateful to my friend, Dr. Francis S. Baker for helping me with that. I wanted to make sure the daylily I named for her was very special.  This lovely purple daylily is just that.  It stands tall on 36 inch scapes.  Lovely purple flower with cream colored watermark with corresponding cream colored edge.  Almost flawless in every way, but occasionally gets hung up on cold mornings.  Easy to use.  Fertile both ways. $200 SF SOLD OUT due to early interest. (Being held for increase)